Last week I left off with us at El Pais in Tucson and we were headed to Organ Pipe National Monument.  We arrived at our boondocking (no hook-ups) spot at Gunsite Wash BLM (Bureau of Land Management) set up our home for the next few days and went to the National Monument to be able to make our plans for the next few days and to see what, if any, trails Eris could hike on.

Gunsite Wash BLM is in Why, Arizona.  It was an excellent and free campsite with amazing sunsets, (and probably sunrises, they happened before I was up), privacy and amazing cell service.  While there was no trash, or hook-ups of any kind in the area we were able to go to a campground in Why, Coyote Campground to take care of all of that when we we left, for $12.00. Speaking of coyotes, we heard them in the distance.  Why (haha) stay here, because it is free and a great place to be to go to Organ Pipe National Monument, the beautiful sunsets and peace and quiet.  Why has a gas station and the campground and nothing much else. There is plenty of hiking that can be done in this area and/or biking.  We did take my bike off the rack for the first time and I went out exploring, it is huge and man am I out of biking shape.

Why you ask, that is the question and we don’t have the answer.  If you ask where we would answer Why.

There is another little town about 10 miles away, called Ajo. Ajo is an old, little mining town with a town plaza, built in 1917. Which has a train depot with a visitor’s center, which was closed at our time of visits.  Mining was the operation of the times and we went up to check out the Mine Lookout. It has a visitor’s center but when we were there it too was closed.  So all we could do was look through the fence. The mine pit is over a mile in diameter.  John Greenway was a business man who had settled in Ajo, he was the general manager of the mining company.  He was married to Isabella who was the first congresswoman for Arizona.  John built Isabella a beautiful home in Ajo.  He died shortly after it was built.  The employees made a cross out of flowers for the funeral.  Isabella had it caste in concrete and brought it up to the top of the mountain, which can be seen for miles in all directions.  Our trip to Ajo was to sightsee but mostly to do laundry and pick up a few provisions. 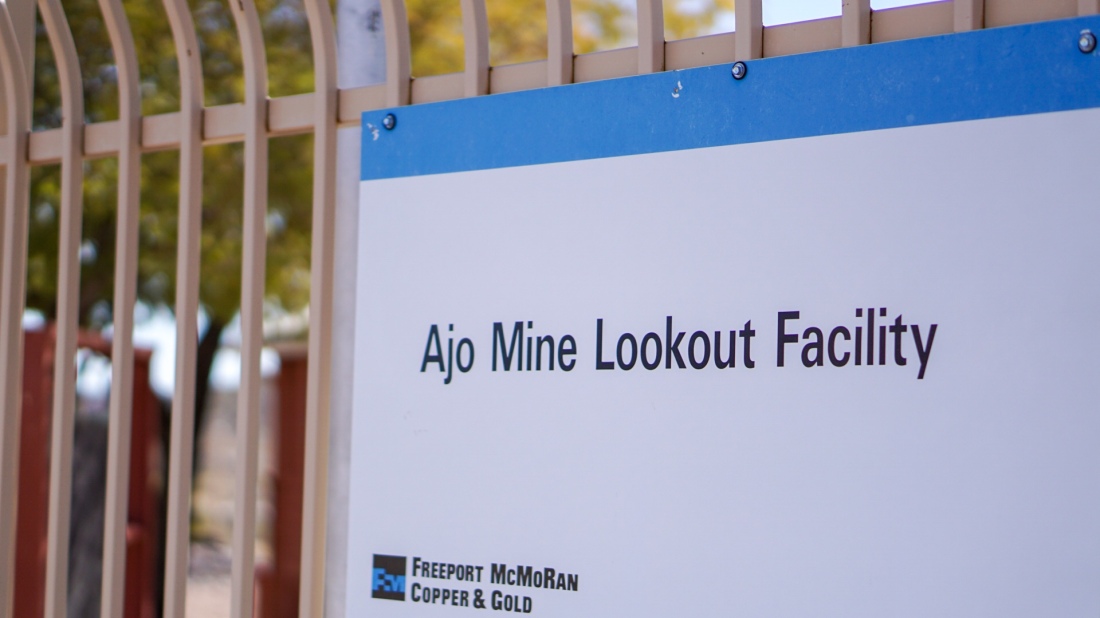 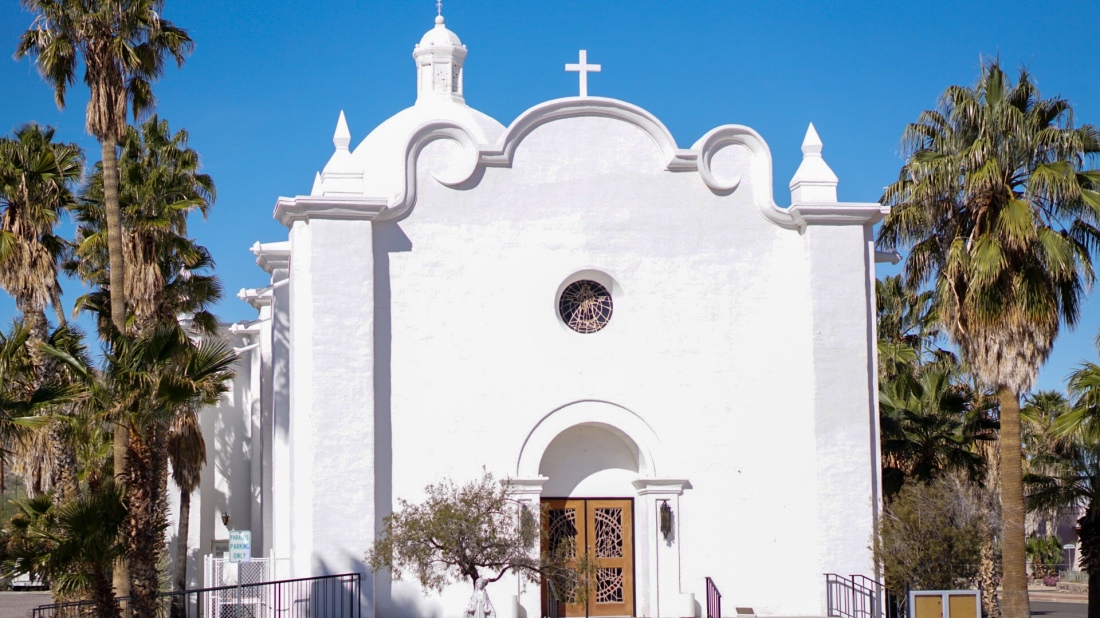 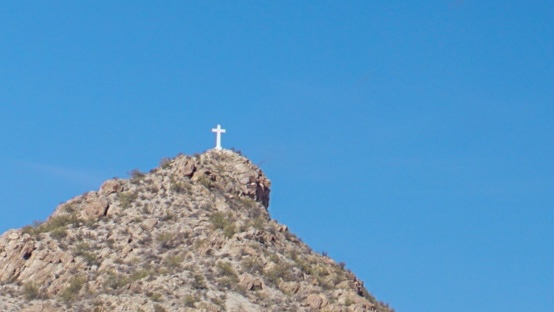 The reason for even going this direction was to to go to Organ Pipe National Monument.  Organ Pipe has a visitor’s center where all the information can be found.  Our trip has been to be able to find hikes we can take the pup on.  There is not much in this park.  Organ Pipe is known as the “Green Desert”.  There are 2 distinct plant commuinities the Lower Colorado Valley and the Arizona Upland.  The Lower has adapted to North America’s hottest climate it is the dryest of the Sonoran Desert the Upland is the wetter of the Sonaran Desert.  There are 28 cactus species but most prevelant is the Saguaro and Organ Pipe. Organ Pipe is a  large rare cactus in the US. The Organ Pipe blooms in May, June and July, we won’t be here to see.   Organ Pipe is more common in Mexico, which is on the border of the National Monumnet.  There are warnings about illegal (I hate to call people that) about them being there, don’t pick them up, watch for people with black water bottles and carrying packages.  Border patrol is the most prevelant in the park. Border Patrol reports that there were over 4,000 arrests and they seized approximately 100,000 pounds of marijuan in Organ Pipe during 2013.   We did not see anything or anybody who didn’t belong while we were there.  We did  get to see the wall. There are two beautiful and yet distinctly different scenic drives.  I am glad we had a truck to to them in.  One is the Ajo Mountain which is 21 miles long we spent one day doing that one, because after all you can’t go fast and there are so many overlooks and hikes to see and the other is the Puerto Blanco Trail which is 41 miles and would only recommend doing with a high clearance vehicle.  It is 41 miles long and took us nearly 6 hours, of course we did do a couple hikes on this road.  While in the area be sure to make the trip into the park it is worth the time. While there wasn’t any hikes we could take Eris on we did do the few we could and our quest to find more hiking trails for her continues. 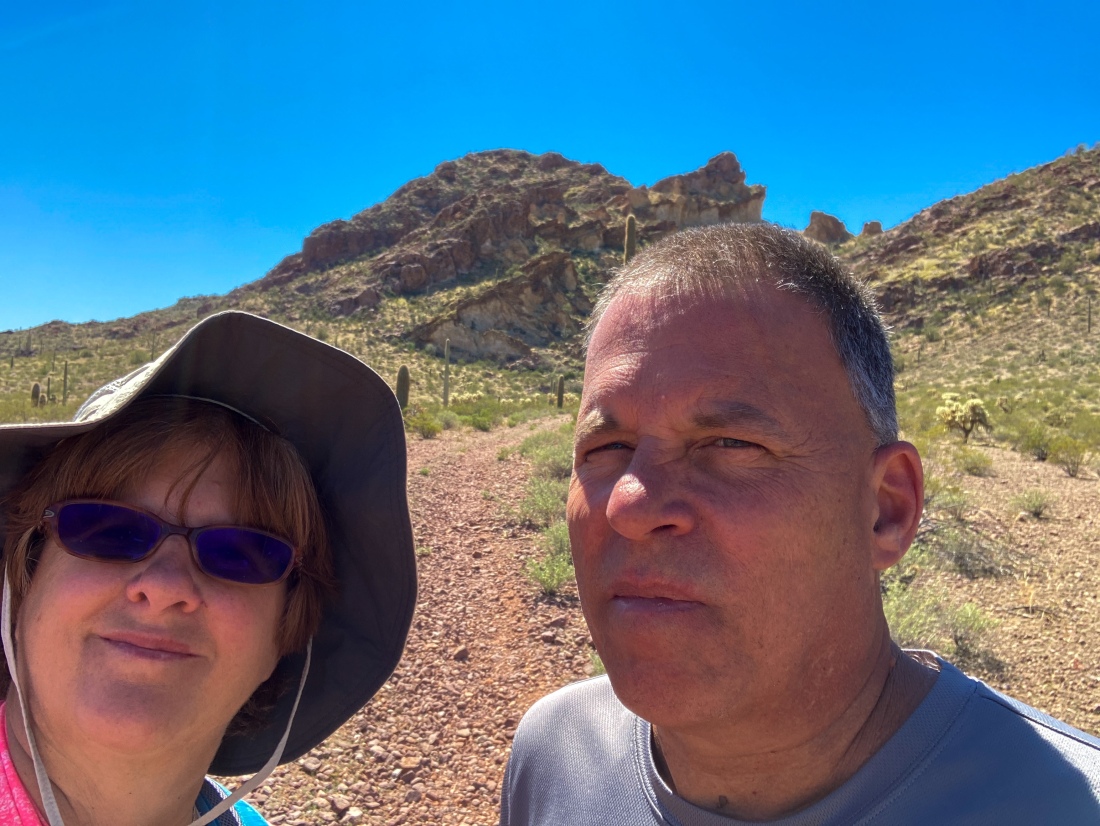 After spending 5 super peaceful nights at Gunsite Wash it was our time to go, we headed up 85 to I-8 to Yuma.  There was a beautiful mountain pass we had to do.  I’m not going to lie, while they still freak me out they aren’t as bad when there isn’t construction and plenty of room. We made it to Yuma, we weren’t 100% sure where we were going to stay.  We ended up in Kofa Co-Op which is an Escapee’s only park and 55 + as well.  It has a pool and nice laundry facilities and super nice people.

What I am digging about this lifestyle is the ability to take the time and stop and smell the roses.  On our way from Gunsite Wash to Yuma Mike saw on the map something about Painted Rock Petroglyph Site and Campground.  We needed to stop, because you never know if you will get the chance again. Take the time and pull off when you can.  Painted Rocks is an  ancient archaelogical site containing hundreds of rock etchings.  It does not take long and we were able to stop, stretch and and have lunch, because afterall we have our home with us.  This was worth the stop for sure. 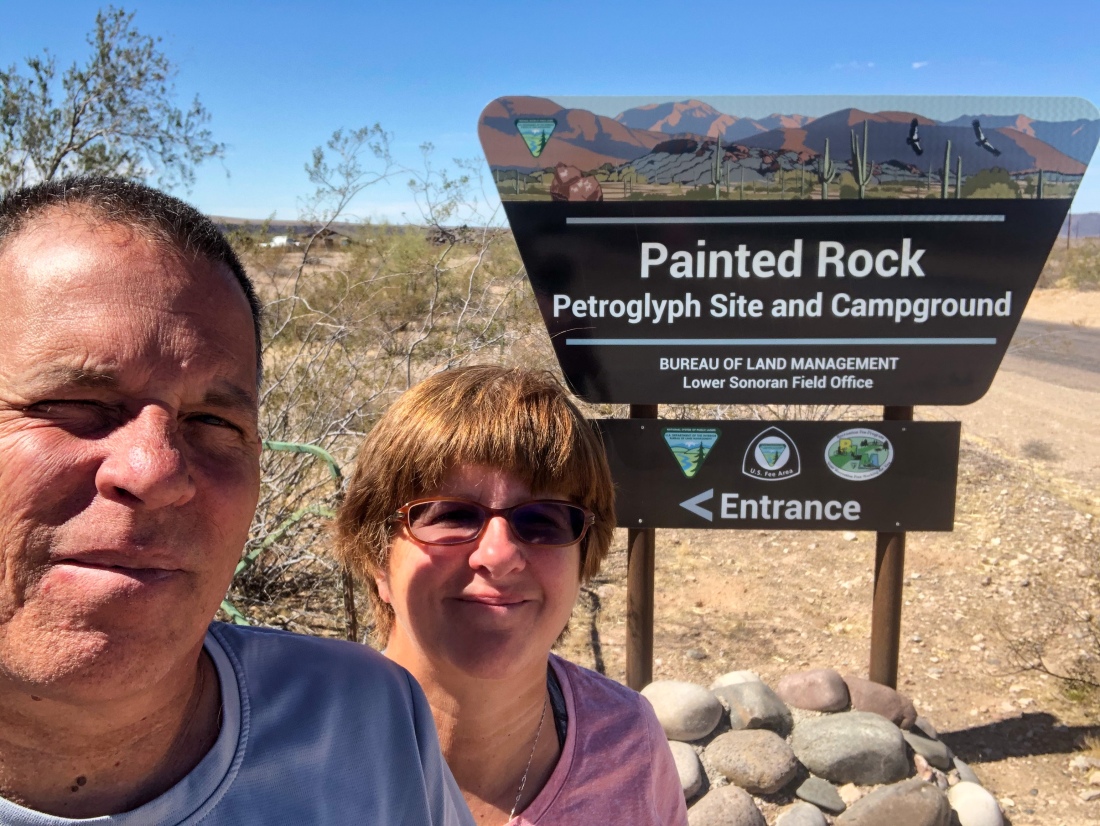 Yuma has it all.  Honestly if we didn’t have our homestead in Florida we could easily find ourselves spending our winters here.  It has a cute little “old town”.  While in the area we wanted to see the BLM land that was around, which is mostly in California.  While exploring we stumpled upon Tumco.  Another off the beaten path.  Tumco is an abandoned gold mining town and is one of the earliest gold mining areas in California.  In it’s span of 300 years or so, it had several periods of booms and bust.  It was pretty cool. Again, if you have the choice while traveling to stop and see things, do it. 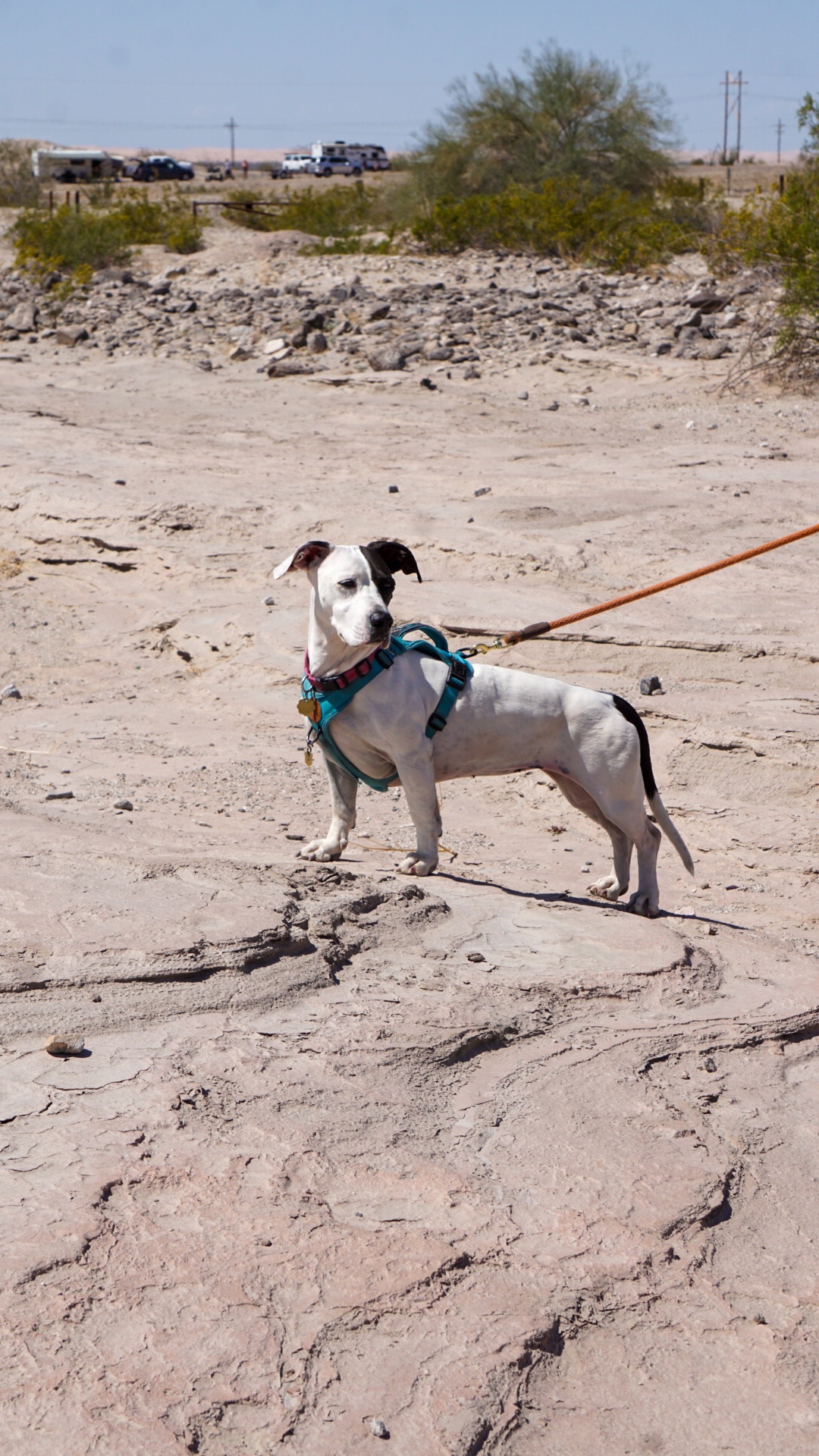 Back to Yuma.  We stayed in a full hook up site for 7 days.  Got laundry done and made many trips to The Home Depot.  We ate at a Chili’s for the first time since the pandemic.  Very interesting.  There are malls and everything here.  While we were here we did go on a 3 mile hike at the East Wetland Park.  Partly wooded and partly wide-opened.  It follows the Colorado River and it was a great chance to see some wildlife. There was plenty more hiking we could do.  But I needed to get some much needed work, well all of my work done as I am not sure what type of signal I will have for the next few weeks,  and Mike was working on more upgrades, we got laundry done. 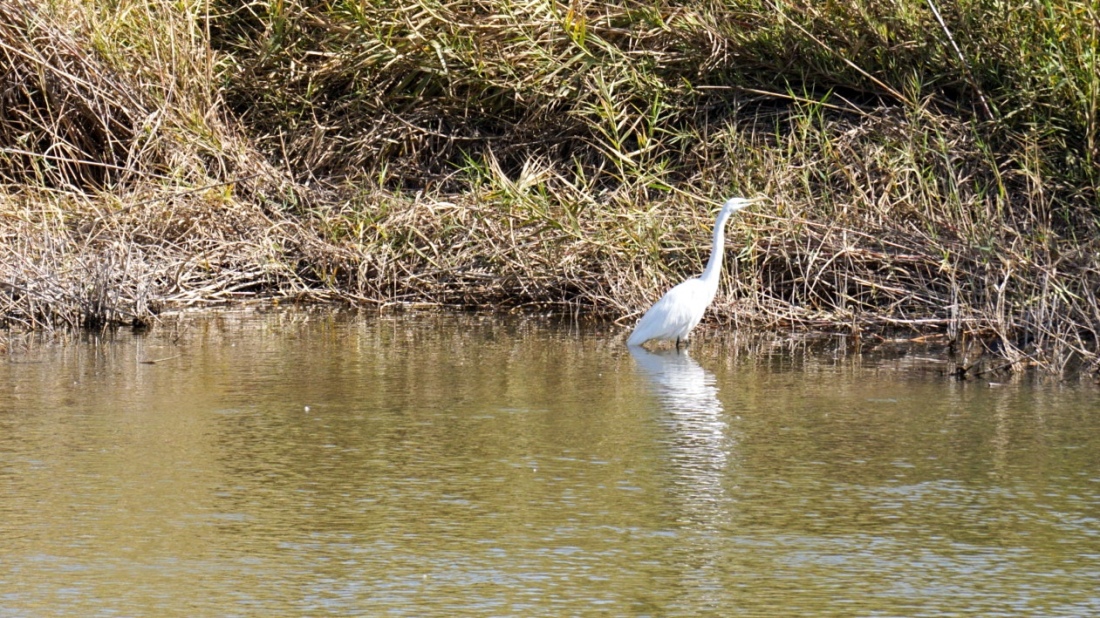 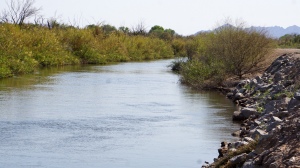 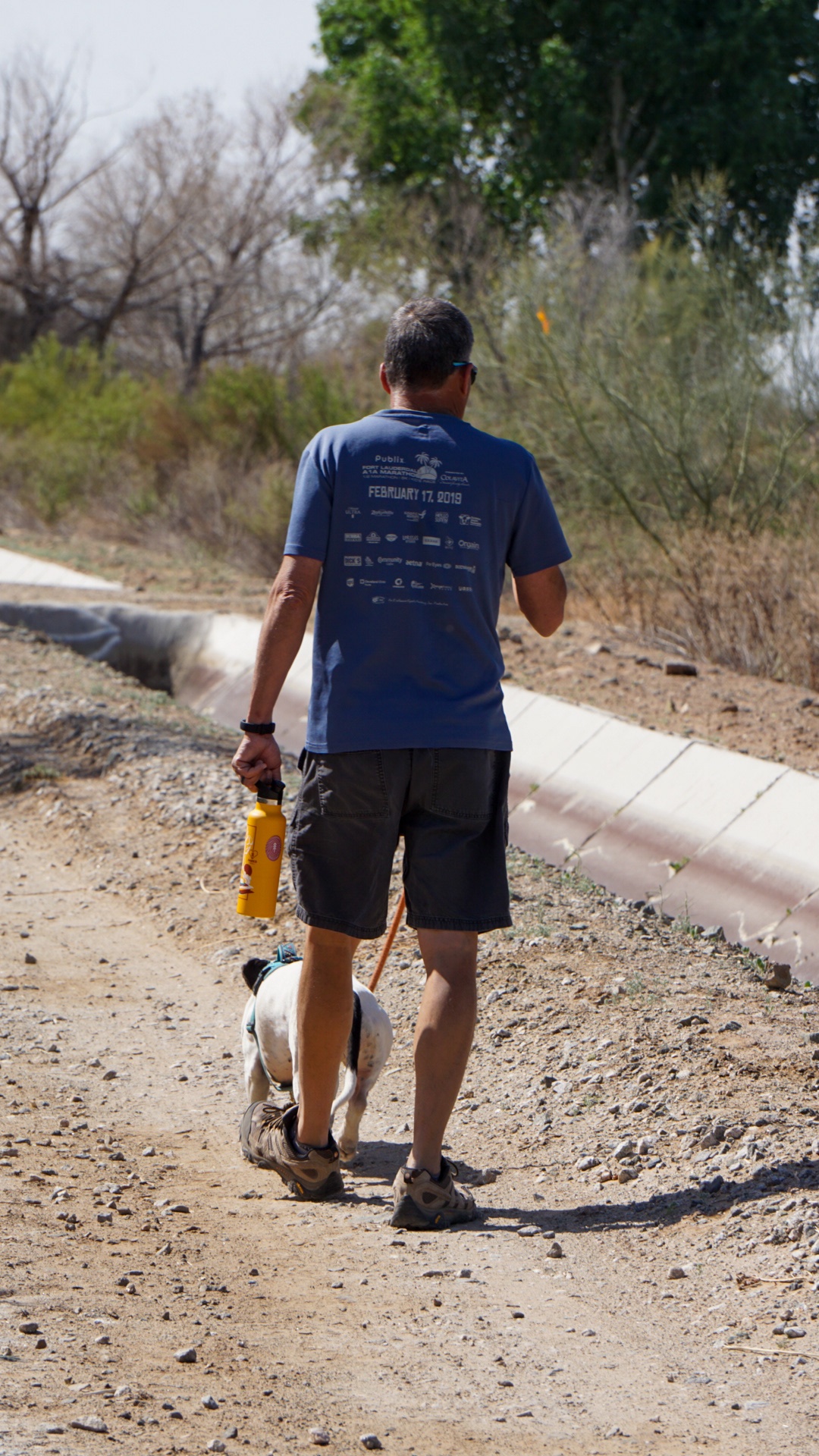 Of course even with having to work some we played alot.  We went to Mexico.  This too is a border town and on the other side of the border is Mexico.  Because of Covid when returning to the US we  must be over the border back in the US by 2 p.m.  Well we heard mixed things, like we needed to be in line by 2 or we had to be over.  Not sure we weren’t going to take chances.  We gave our neighbor the code to our door for the just in case we weren’t able to make it back so she could take care of our pup.  It wasn’t needed.  Next year when we go I plan on getting dental work and eyeglasses.  Where we crossed was Los Algodones.  We choose to walk over, which is very common.  Getting into Mexico they barely looked if we had any documentation.  Everyone was masked up, so made it feel somewhat safer.  It is like on a cruise where everyone trys to sell their wares.  Just say no thank you and they leave you alone.  However, not only are their wares the usual hats, ponchos etc., it is also dental and optical services.  A comparsion someone we spoke to had gotten a dental quote in Houston for $7,500.00 and had it all done in Mexico for $250.00.  Another comparson is my eyeglasses. I just paid nearly $500.00 for my glasses, frames included, there I was quoted $140.00 including frames, and eye exam.  So next year we will be back to Los Algondes for both of those services and of course a delicious Margarita and some lunch, both of which we had at 10:45 a.m. yup, 10:45 a.m. We figured it was noon somewhere.  After our delicious, intoxicating lunch we headed back to the border crossing.  We also heard that it could take hours to get across.  There the US Custom’s Agents actually did look at our passports, made us take off glasses, masks and any hats we may have had on.  But it was smooth.  When asked by the agent what I was bringing back I said alot of stuff I don’t need nor have room for, we did come back with a poncho, a jacket, a spoon rest, a wooden turtle, a bracelet and a dress oh and of course a bag.  We had a great time and we made it back in the US within 30 minutes. 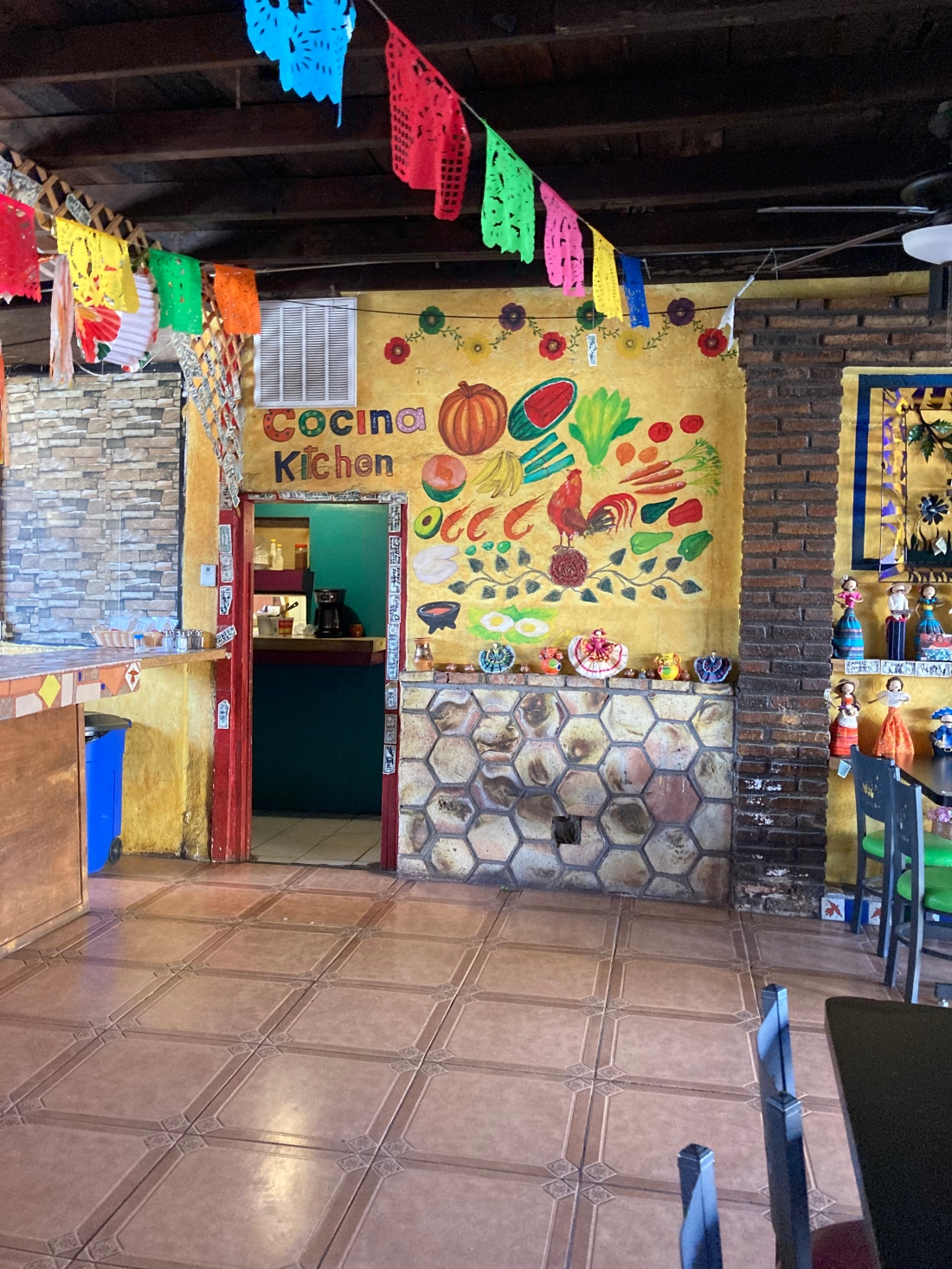 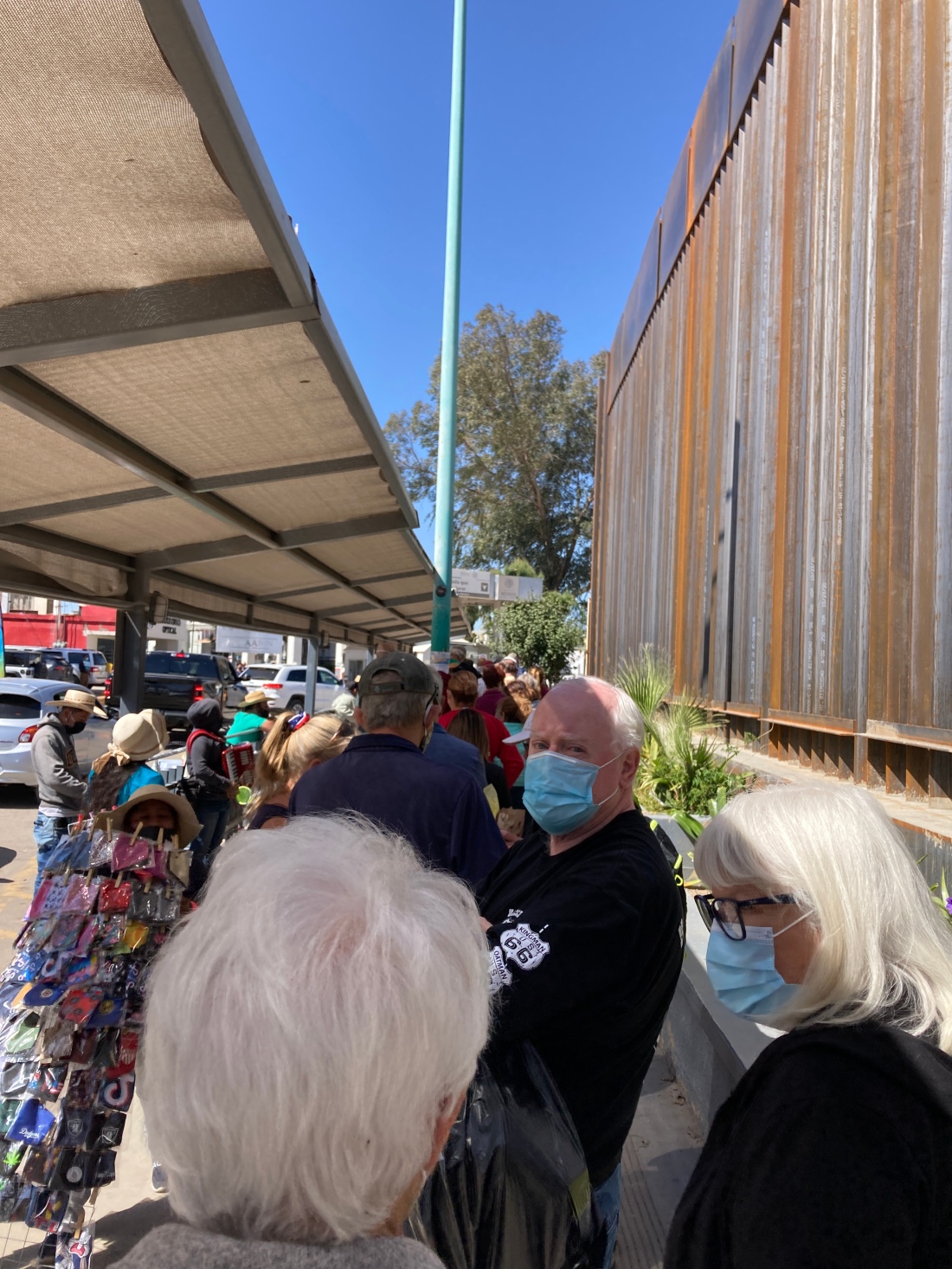 Another fun thing we did in Yuma was the Yuma Territorial Prison which is the historic prison in Yuma.  It was opened in 1876 and shut down in 1909.  It is named as one of the most haunted places in the US.  Over the course of 33 years it had 3,069 prisoners, 29 of which were woman. The crimes ranged from murder to polygamy with a little adultry in there as well.  This is the 3rd historic park in the Arizona.  There is a graveyard where there are 104 prisoners buried here.  After the prision closed down it became the high school while the new high school was being built.  There were movies made there, 3:10 to Yuma to mention just one of them.  It was said that the area was being stripped of anything valuable there, the citizens of the City of Yuma put a stop to it and made a historic site. There is a museum and a gift shop.  After touring the old prision of course it was time to go the Prison Hill Brewing Co. for lunch.  The beer was delicious and the lunch was equally as tasty.  We traded stickers.  When our server put it on the wall, one of the other server’s said wow that has to be the farthest away from us. 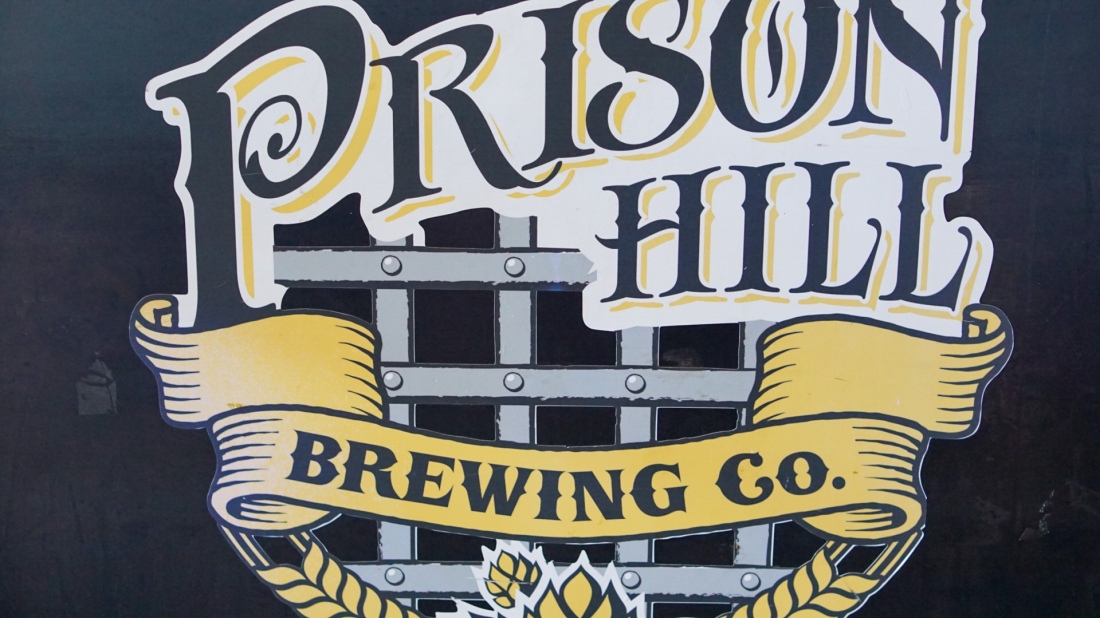 We saved some stuff to do for the next time in Yuma and after a week of civilization it was time to get on some free land, so we left and headed north.

Come back next week as our adventures continue up to Quartszite.