We headed to Cathedral Gorge after reading about it in some paperwork we received by Zion in things to do in area.  We have found out that “in the area” means anywhere from a few minute drive to a 2-3 hour drive.  Anyway, this place intriqued me and they had me sold on it when it read that it is a photgrapher’s dream location and that dogs can hike any of the trails within the park.  Catherdral Gorge is one of Nevada’s first state parks.  The campground is first come first serve most with electric but there is an overflow area with some spots  that if you don’t need electric you are welcome to go there.  It is located in southwestern Nevada between Panaca and Pioche Nevada.  Panaca has a gas station and not much else and Pioche is not much better but has some interesting history.  But for now let’s get back to the park.  It has some amazing views and all the hiking can be done right from the campground.  We arrived at 12:30 p.m. and were able to score a site for the next few nights.  The campground was clean and it was super nice to not have dust blowing through our camper all the time.  We  opted for electric thinking we might want the ac, but honestly we used the electric heaters more. 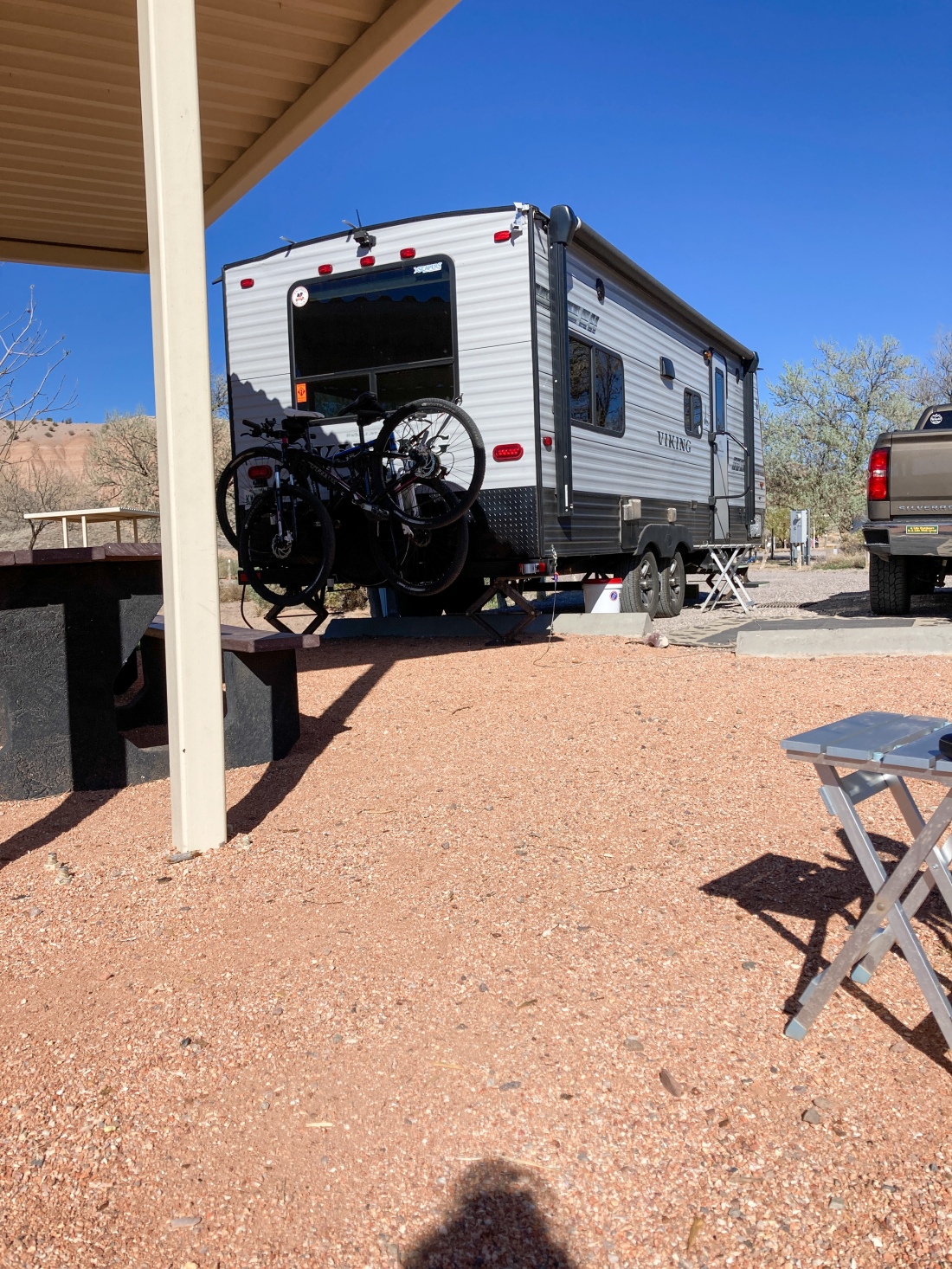 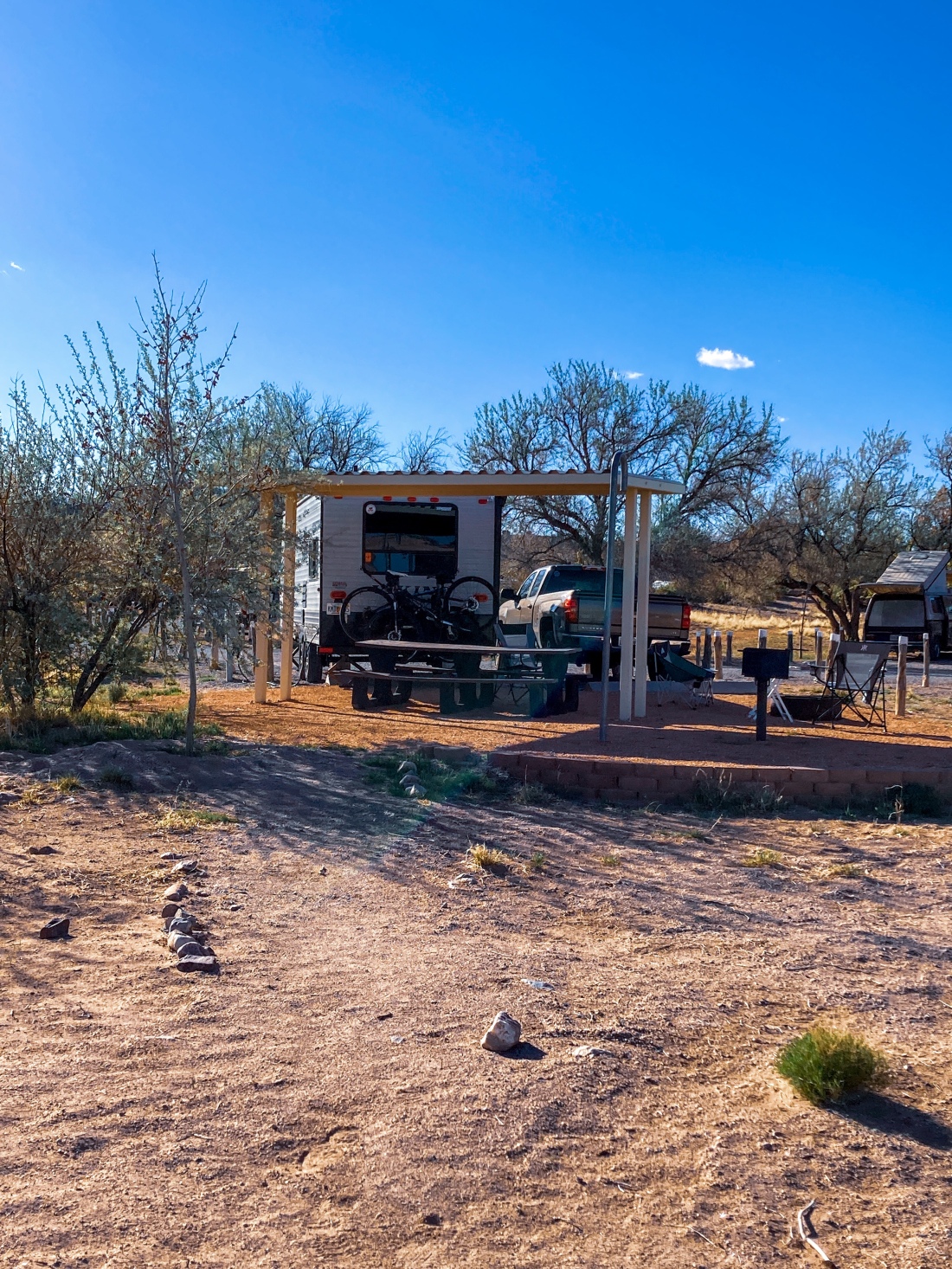 The parks geological features is what makes the place so interesting.  There are some decent hiking trails and views.  Mostly, everything is from the bottom, where we were able to climb in and out of the short, but numerous slot canyons.  The canyons were formed from erosion that is caused by snow melt and rain.  When it rains the water leaks out of the bottom like a straw.  The ground where we were walking is now a dry lake, which was a lake nearly 1 million years ago.  Over the centuries it began to dry out and hence became this ancient dry lakebed.  There was a nice fairly easy and well marked trail down on the bottom, it took us out closer to some of the other formations.  There were a couple other trails you could do that took us to a ledge and an overlook.  I overlooked enough, snapped some pics and was good and didn’t have to do the ledge.  The other hike took us from the bottom up to the top and then it got scary for me, so we turned around.  The hike that stayed on the ground was by far my favorite.

The town of Pioche which as some services, when I say some, I mean a few, there is no grocery store perse.  It sits at 6060 feet of elevation and it is the county seat of Lincoln County.  It is a silver mining town or at least was. In the early 70’s, 1870’s that is it had grown to become one of the most important silver-mining towns in Nevada.  It also had the reputation of being the roughest towns in the “Old West”.  It was reported that about 60% of all the homicides during 1871-72 took place in Pioche or surrounding areas.  Local legend tells it as 72 men were killed in gunfights before the first natural deah occurred.  Hence creation of Boot Hill Cemetery, which is now a landmark in the city. Pioche is also known for it’s “Million Dollar Courthouse” built in 1872.  The original cost of $88,000 far exceedin the estimates and was financed and refinanced with bonds totally nearly $1 million dollars.  Today it is the county administrative office and has one of oldest grade schools in the state. There is an aerial tramway which carried buckets of orde from the mines to the top of Godbe Mill.  It ran from the 1920’as- 1930’s.  There are buckets still hanging and people use them as decoration.  After coming from the campground we headed down the mountain and took us to quant western town.  Where we were able to get gas and check out Boot Hill Cemetery.  There were boots placed on the graves and the headstones were carved in wood. 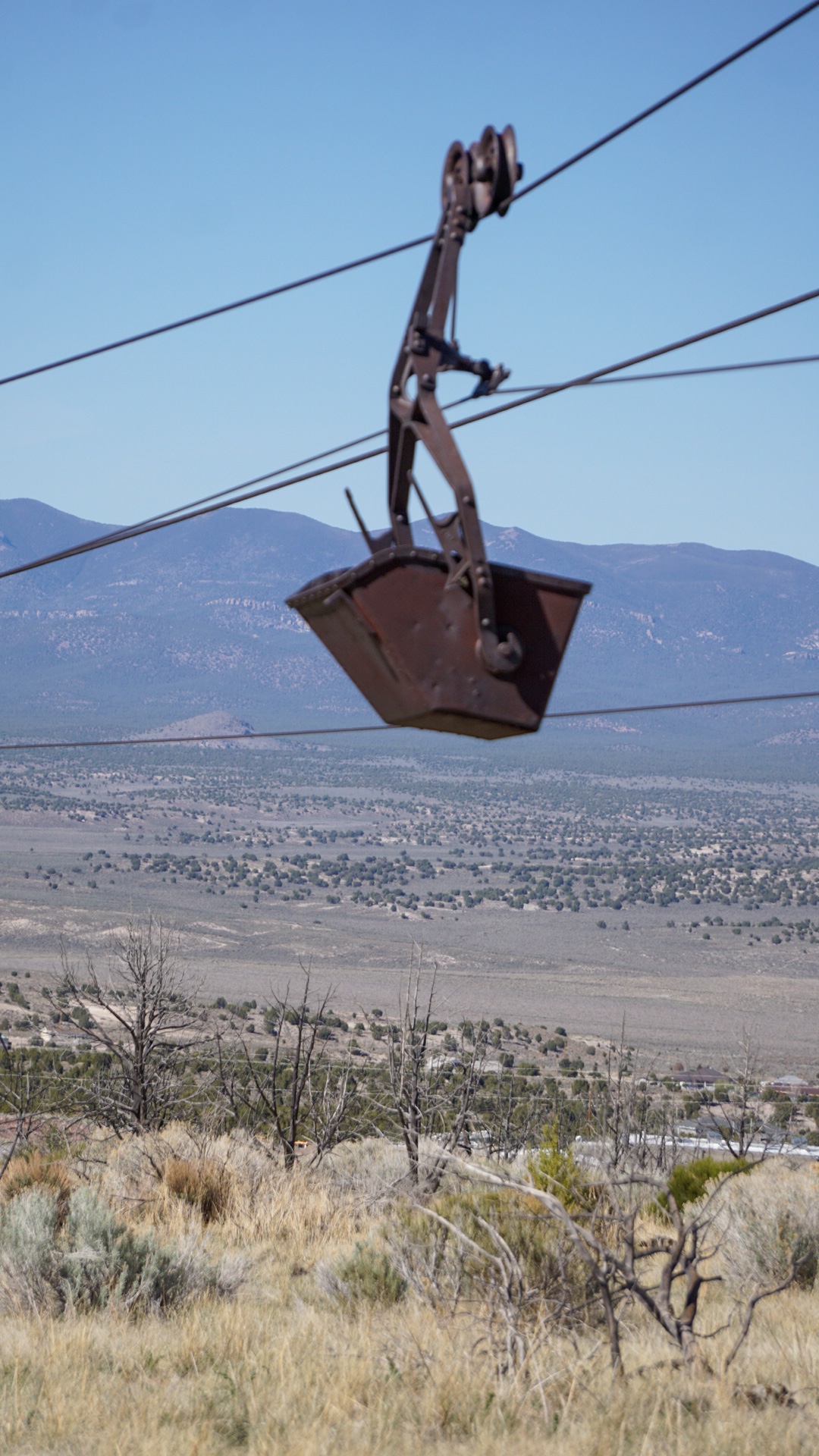 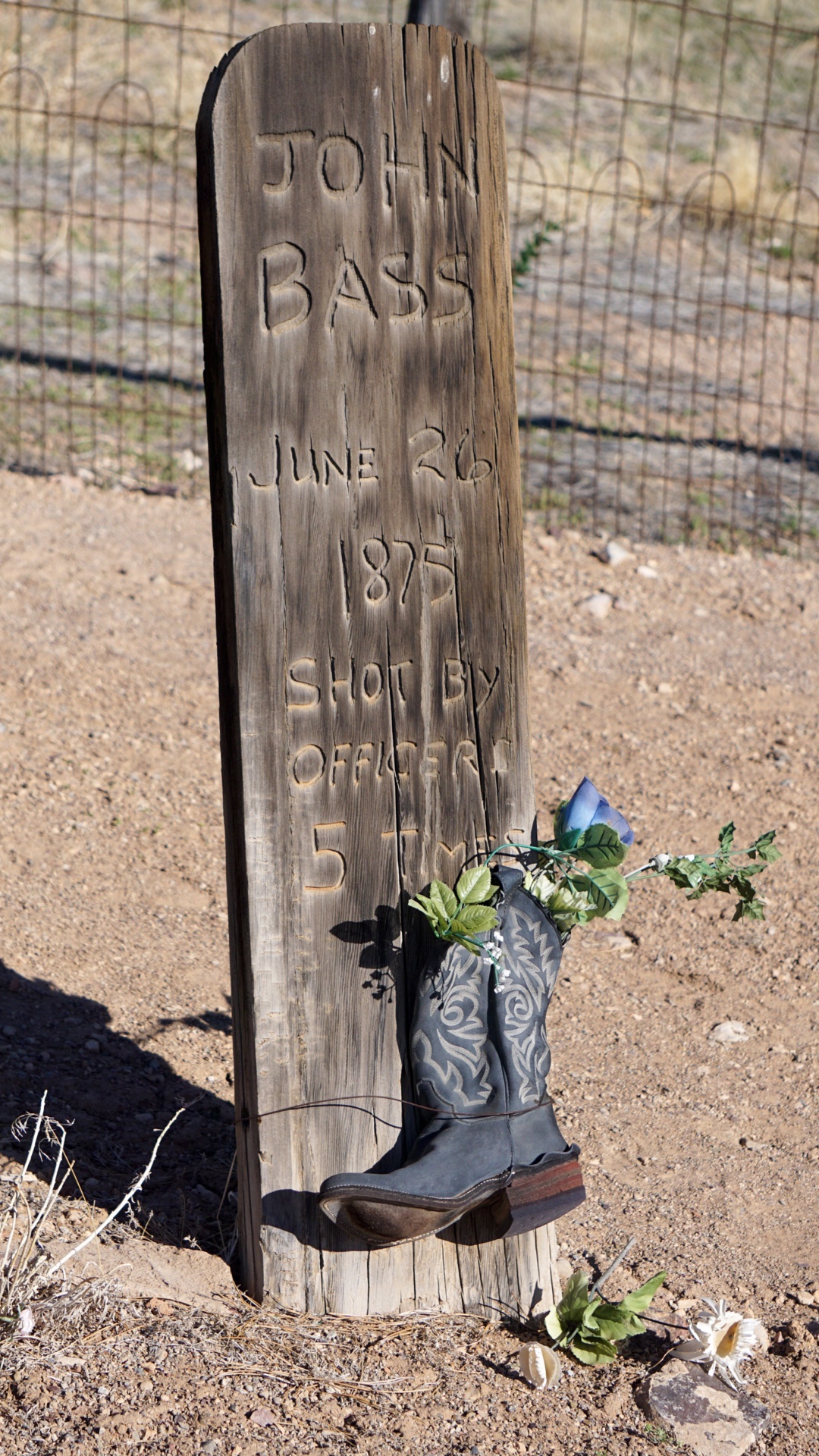 Interestingly in Pioche there is a little city run RV park, pay by donation.  It had trash cans at each partial hookups. As we were enjoying our state park amenities we didn’t really investigate much more about it.

That’s all I have to say about our first Nevada State Park.  We enjoyed ourselves during our stay in Catherdral Gorge but it was time to move on, be sure to catch us next week as we head back into Utah to Parowan Gap Petroglyphs.

Our favorite addition to our camper of the week, we should have written about back when we were in San Antonio, is our TPMS, (tire pressure monitoring system).  They are little guages (sending unit) that monitors the tire pressure and relays it to the display in the tow vehicle.  We had the original tires (and as everyone who owns a camper knows they are crap) on our camper when we left for this first season on the road, we meant to change them before we left but didn’t find a convenient time to do it and afterall we had reservations we needed to get to.  So we thought we will do it while we were in San Antonio, well guess what, we didn’t make it to San Antonio when we had our first blow out.  Luckily for us our TPMS was working and went off.  The roads in Texas are so horrrible I think if the TPMS did not go off we would have continued driving on a blown out tire and it could have cause all kinds of damage.  We were fortunate that it went off where it did and I was able to get off at the next exit, (it was right there) and go across to the shoulder so we could change the tire and get back on the road.  Another thing I am so glad we purchased before we left  was the Trailer-Aid Tandem Tire Changing Ramp.  It made for fast business to get the tire changed quickly and safely.  We just drove up on to it and we didn’t have jack our camper up at all.  We use Tireminder brand for our TPMS system and it has worked flawlessly.

So if you are on the road, one piece of advise we can give is, get a TPMS, and changing ramp and be sure to change your tires if they are the crap ones from the factory, don’t wait.

If you like this article I’d appreciate it if you could like it and consider following us. We will catch you next week as we talk all about the Parowon Gap area of Utah.
Until next week, remember don’t wonder what you have been waiting for and  keep exploring, discovering and dreaming.